BLOG
You are here: Home / BLOG / Music Blog / The Bodhrán

The Bodhrán Makers by John B.Keane has been a recent acquisition of 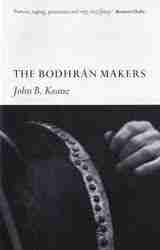 ‘an bodhrán’, the Irish drum.

It was acknowledged by all those who understood the complexities of the business that Bluenose was the best of all bodhrán makers. There were some who would argue that he was too fastidious. Others would say that his instruments were too refined but there were none who would not say that they were special, and they had a unique timbre and a rolling resonance found in few bodhráns